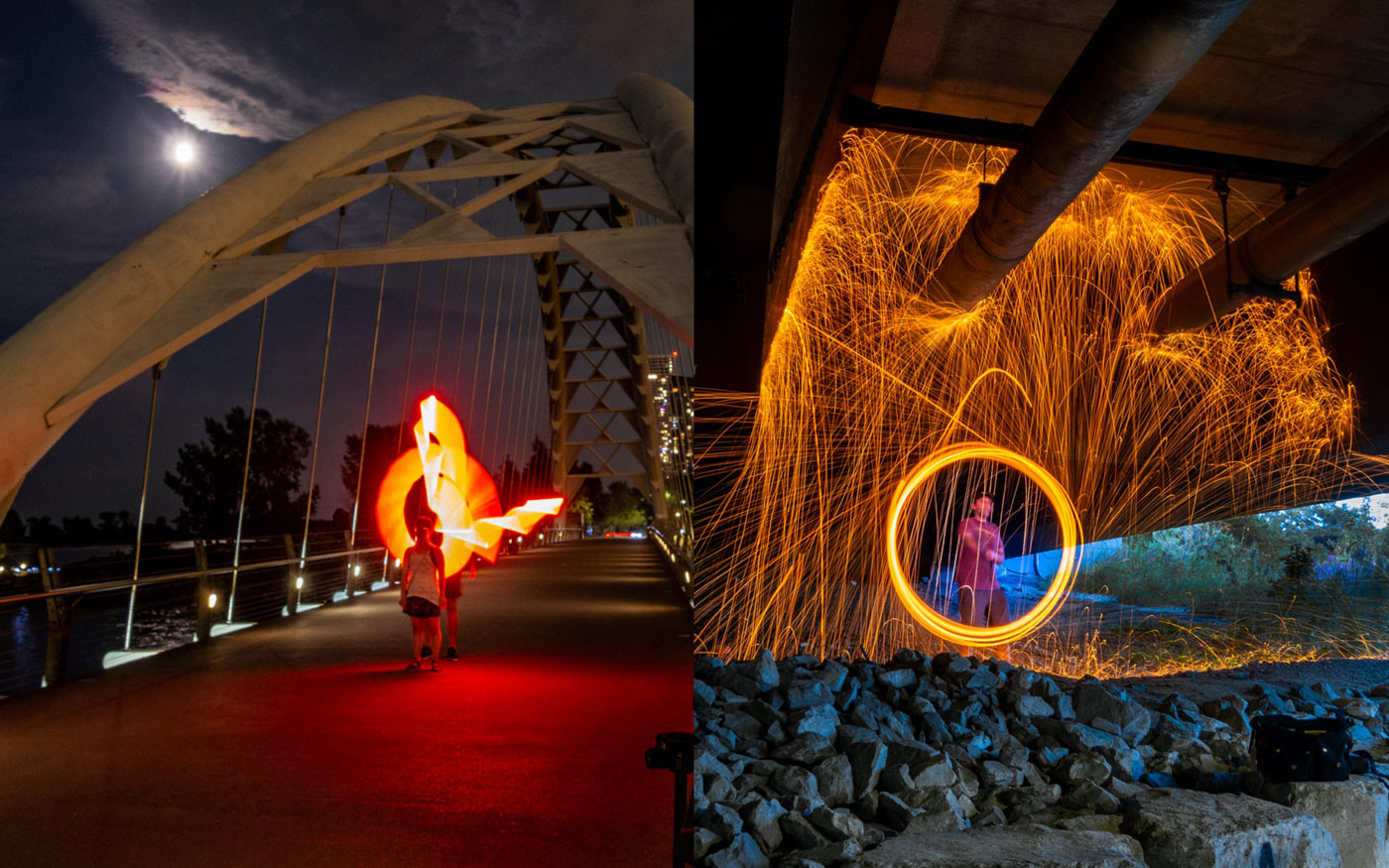 Steel wool spinning is an absolutely stunning visual display that looks incredible in person and phenomenal in long exposure photography. The same is true for other kinds of light painting, particularly in the hands of someone who has had opportunity to practice and delve deeply into the art form.

In August 2022 I collaborated with GTA photographer Scott Visscher on a series of light painting and steel wool photo shoots and a group photo walk. In this article I present some of the basics about how one goes about setting up these shoots and I share some of the images from our practice run and the photo walk meetup.

Steel wool spinning involves a handful of everyday hardware / housewares section tools that can be acquired from many retail stores. Scott describes the gear and camera settings in his steel wool article for Tdot Shots.

To sum up you need a whisk to carry the steel wool, a leash for spinning, and a lighter or battery to ignite the steel wool. For the photography part, you need a camera that can ideally shoot in RAW format, and some kind of stable surface for your camera – tripods work best to capture long exposures.

At minimum you will need at least 4-6 seconds to capture the effect of the steel wool moving through the air in a circle, but Scott recommends 10 seconds, in order to get the brightest, busiest display of sparks. A shorter exposure will leave more detail in the shot of the background and setting, while a longer exposure will create a rich, thick fountain of sparkles in your final image. During the shoots I experimented but most of my images were between 6-8 seconds, as I wanted to be able to view some of the background without it becoming over-exposed.

Meanwhile Scott set his camera on 10 second exposures while spinning, triggering either with a remote control held in hand, or using the intervalometer function to record a continuous series of long exposure frames.

Scott can really generate some powerful windmill strokes and you can see from the images that the circle is tight and sparks plentiful. In some of the exposures he employed a slow 10-second walk in a circle to get that lovely oval, circular effect. Mostly the variance was between the portal, with the front circle, or the lasso which is the overhead spin.

I also tried a spin or two, but while I could get the spin going I didn’t have much staying power – my speed was slower, thus fewer sparks were produced during the approximately 10-12 seconds ignition period of the steel wool.

If you have shot your frames in RAW you have more latitude in the edit to take advantage of the camera’s dynamic range, and bring down highlights or raise shadows. It is common to do both, and also play with white or black values. The overall colour tone will be warmish, but I noticed a natural blue in the shadows of my edits, so I decided to accentuate this in the rocks, and add some blue tones to the inner part of the circle. A colour grade approach with some element of the orange and teal look, popular in movies and tv, can really make the sparks and light sources pop.

Video is a trickier. While a few of us tackled getting video clips of the action, unless you particularly changed the shutter speed while shooting the video, the effect would not have much if any of the long exposure aspect. If I try this again I may try video recording with 1-2 second shutter speed or a series of burst shots with the same approach. In any case, it’s a photography set up so video is a secondary concern.

Here are some of the photos. If you have a comment or question please reach out via email or leave a comment on the Instagram posts. Cheers! Appreciate you taking the time to check out this post.

Mike is a designer, web and media producer, educator and writer. He’s been a college teacher, trainer and freelancer. Catch up with Mike via his Tdot Studio website tdot.com/studio, and Instagram page @tdot_mike