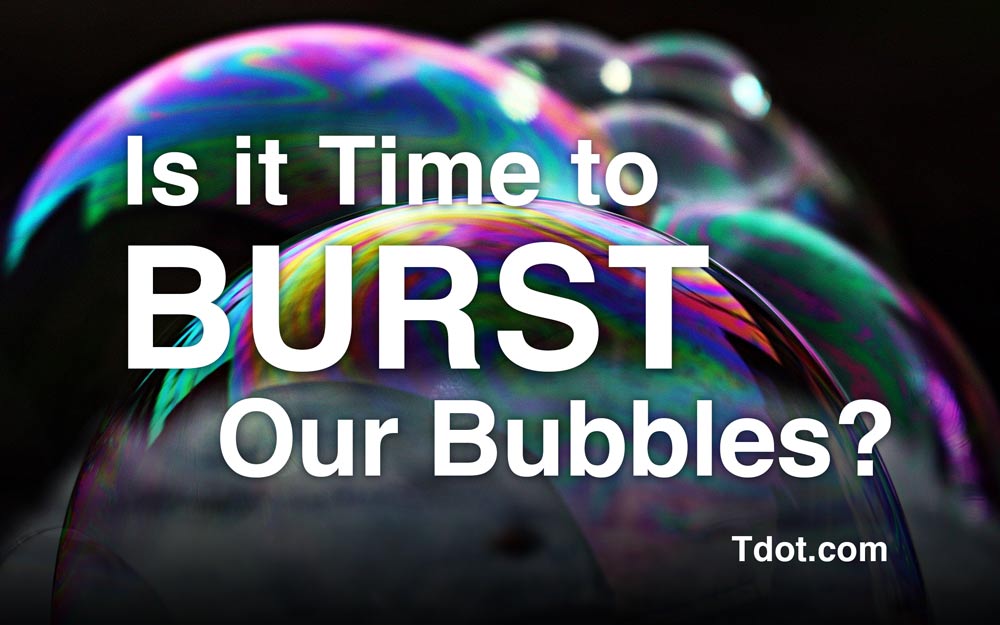 Update: We note that Premier Ford has asked people to stop attending social gatherings. This is a step forward as it’s clear the second wave is underway.

It’s time to burst the bubble. I’m speaking metaphorically and literally. We are living under collective delusion. Since July people have been enjoying their summers and regaining much needed mental health by getting out and about and socializing. It’s time to get real and burst our bubbles of delusion.

It’s also time to burst our “social bubbles.” It’s getting people sick. Whether outdoors or indoors, too many people from different households are interacting without distance or masks, and it’s spreading illness.

It’s not just about the parties in Brampton. Sorry Premier, but I also see the picnics in High Park. Gatherings of people unmasked, people interacting unprotected at close range,, who are not likely in exclusive and strict bubbles. We have all enjoyed Phase 3. But, we let our guard down.

While many in the city and GTA are still being careful with their social lives, wearing masks and keeping the two-meter distance as a regular practice, a whole whack of people are not. And that’s gotta stop. It’s not just teens or twenty or thirty somethings – it’s everybody.

We have been on a multi week upward trend in cases of COVID-19. It’s worrying that we are getting back to school and thereby into the last element of re-opening and so many people are getting sick. And right before flu season.

Today we hit 300 new cases. It isn’t rocket science to note that with the upward tick in cases for weeks that we are going to crack 300 regularly and perhaps hit 400 or more cases in the weeks after schools reopen.

What is it going to take for corrective action to be taken? Are we going to wait until we are fully into a second wave of this pandemic? Premier Ford said local municipal authorities can undo some elements of the reopening.

Do we really need outdoor gathering limits of 100 people? Is it really sensible that people are told that their bubbles can have 12 people in them? How big are the extended second layer bubbles when you factor in all the interactions with workplaces or school or daycare and playgrounds?

It feels a little like deja vu. I’m thinking about mid-March when we had started having small numbers of cases and then suddenly everything was totally shut down.

The province has let us down with an inadequate plan for schools. So far, all the city has pledged to support schools are some community spaces and some nurses in supporting roles.

There doesn’t seem to be much coordination between city and province when we are facing a potentially devastating second wave. I was speaking to someone today who works in schools. They told me that TDSB has policies instructing teachers that when they use parks to keep classes AWAY from the playground equipment. Yet the City of Toronto has no such policies because we are in the stage called Phase 3 where playgrounds are used normally again.

This presents inconsistency. A child is denied use of the playground when they go out with their teacher at 2 pm. Yet at 3:15 pm when walking home with their caregiver or parent they all can use the playground at will. It’s not a contradiction because the school limitation does help minimize risk, but it’s very inconsistent.

So what should be done? We don’t have to roll back the economic reopening. Not yet anyway. But public figures could be more demanding on the public regarding safety protocols and using common sense.

My concern is that with a) economic reopening b) social reopening aka bubbles and now c) school reopening we are going to have a huge increase in COVID-19 cases.

In risk management assessment we would say we are putting everything on the risk pile – and it is imperative to begin removing things from that pile. Social bubbles would be the logical first step.. People are spreading the virus and it’s not just teenagers and those between 20-40 years of age.  In general, too many people havebecome relaxed about close social interactions.

Unfortunately, we are likely to repeat March by October or November. Joe Cressy and company (Toronto Board of Health) were meeting in January about the potential of a pandemic. I’m sure the Ontario government had similar meetings. Why didn’t they give us a heads up?

Rather, instead of warning us or putting smart measures in place, they let it go on and on until suddenly in mid-March we SHUT IT ALL DOWN. It was like those in local and provincial government were asleep at the wheel.

Our city and provincial governments are the most deluded of all. Let’s see how many cases we get in the period 2-4 weeks after school re-open.

Please take some risk off the risk pile. We can keep school and work re-openings, but social bubbles have to be eliminated. If we want to keep up the freedoms we enjoy in Phase 3 we have to be as cautious aswe were in Phase 2.

Sorry to burst your bubbles but it’s time to get real.

Tdot.com aka Tdotdotcom is a team of writers and creators from Toronto, Canada. Contribute to our city guide or blog, we welcome your ideas! Hit us up via the Contact page! Check us out on Instagram: @tdotdotcom